The only place our family looks sort of typical or orthodox is on paper. I have a 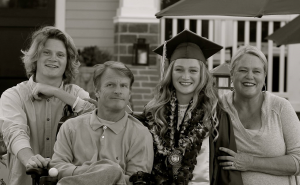 husband and we have two kids – a girl and a boy. There it is, the external frame of our family. Ostensibly though, that’s where convention ends and we begin. Married to someone with cerebral palsy.

Due to an accident at birth, my husband Stephen has a severe form of cerebral palsy. He uses an electric wheelchair to get around. He really has the use of only one limb and has a speech impediment. He’s an environmental engineer by profession, but gave that up a really long time ago to start a wilderness camp in Lake Tahoe for kids with physical disabilities called Camp Wamp.

In 2010, he became the first man with cerebral palsy to climb the biggest rock face in the world, El Capitan in Yosemite National Park. Stephen did 20,000 pull-ups in preparation, slept on the mountain for five nights and finally reached the summit on the sixth day – the summit being twice the height of the Empire State Building.

My husband, Stephen J. Wampler, has made our lives abundant and robust. I consider him to be a compelling example of vigor and the booming magnification being manifested today in people with disabilities. A new, auspicious day is approaching in the world of disability and it’s invigorating! There is a buzz in the air and it hints of more than a mere social advancement, but rather an unfurling and alteration in the quintessence of a whole population of human beings.

Not all of this is easy. The thing is, the world of disability, with the help of technology and a growing human pledge in both progressive corporate cultures and a social inclination is where the commendable rally has begun!

In contrast, Stephen is certain that were he to have been born just two short generations ago, he would have lived his life in an institution, or with his mother in the family home until his death. Nothing would have been expected of him on any level. None of his capabilities nor any of his intellect would have ever been exposed or in any way applied. That was then, this is now. Society is moving up, and I am optimistic and reassured.

Disability seems to lay bare a delicate beauty and intrinsic virtue in the human heart. In the years with my husband, I have been witness to the many people eager to bring their very best, first-string version of themselves to my life’s partner. I have been the honored observer of an immeasurable abundance of decency and accommodation in almost every human being. Can you imagine? I’ve learned that people become uncovered and vulnerable with Stephen almost all the time. Even when they’re a bit vulnerable in life themselves.

Stephen will tell you that I was the most apprehensive, uneasy person he had ever met. Me. Yes, me, the person who went on to marry him and have kids and share a life with him. He says that when we met, I was both unintentionally funny and cringe-worthy. 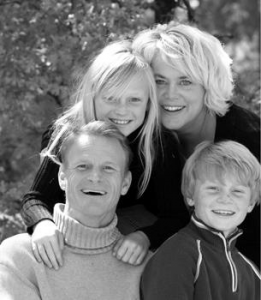 atters worse, I thought I was nailing it! I thought he thought I was smooth and carefree as I tried to come across as if I didn’t notice that huge wheelchair or that speech impediment of his. Yep, I win. While I thought I was one cool cat, I was instead the most uneasy, jammed-up, grappling person he had ever come across. He watched me, head probably cocked to the side a bit, and stayed patient while he watched me, probably trying not to laugh, yet so kind and understanding until I got more comfortable over time.

Very simply put, I got over it; the chair, the speech impediment, that big chair. All of it…….so anyone can. We have been married for 25 years, have two kids who came to the world in the usual way (there you go, I KNEW you were curious… you’re welcome). I’m happy that I got brave enough to get to know this magnificent human. It all works, the messy intros, all the clumsy muddling. We’re all trying, and I think it’s safe to say we all care. We stumble and improve and, hopefully, we can learn to not be afraid and to lighten up. No matter the discomfort, our attempts are always sweet and commendable.

I want to create a new way to look at disability and the one billion people on our planet who have great stories and are living vital, bright lives. Let’s crack this dialogue open together.

Elizabeth Wampler is the wife of Stephen J. Wampler and co-founder of the Stephen J. Wampler Foundation. In 2004, she and her husband launched Camp Wamp, a wilderness sleepaway camp for children with physical disabilities. In addition to her work with the launch of Camp Wamp, Elizabeth is an avid advocate for people living with disabilities. Some of her accomplishments include TED Talks, film producing and creating community awareness surrounding the topic of disability. For more information on Camp Wamp, please visit https://stephenjwamplerfoundation.org/.

Married to Someone with Cerebral Palsy By Elizabeth Wampler, Co-founder of the Stephen J. Wampler Foundation2019-06-112019-06-11https://www.nationaldisabilityinstitute.org/wp-content/uploads/2018/10/ndi-website-logo-colored.svgNational Disability Institutehttps://www.nationaldisabilityinstitute.org/wp-content/uploads/2018/10/ndi-website-logo-colored.svg200px200px