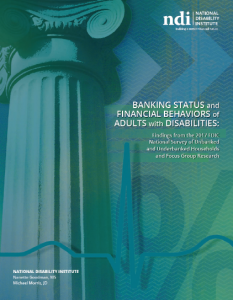 Status and Financial Behaviors of Adults with Disabilities: Findings from the 2017 FDIC National Survey of Unbanked and Underbanked Households. The report finds that, in the 29 years since the landmark Americans with Disabilities Act (ADA) was signed into law, ensuring all individuals with disabilities the opportunity to achieve “economic self-sufficiency,” this population still faces numerous financial hurdles and roadblocks to financial inclusion.

Based on data mined from the 2017 FDIC National Survey on Unbanked and Underbanked Households, this insightful report highlights the financial choices and banking habits of adults with disabilities. This is the third report, based on FDIC data, that NDI has released in five years.

“Americans with disabilities face unique financial obstacles and challenges that separate them from their peers without disabilities,” National Disability Institute Executive Director, Michael Morris, said. “Today, with the release of this report, we now have a clearer picture of the challenges they face, but also the significant opportunities to design solutions.” Continued Mr. Morris, “It is essential that policymakers, financial institutions and community organizations rally around the report’s findings and recommendations, and begin to work together to ensure equal access and financial inclusion for people across the spectrum of disabilities.”

The report findings provide an important lens on the financial choices and decision making of Americans with disabilities. Report highlights include:

The research and report were made possible through the generous support of JPMorgan Chase.